By Testing for Kindergarten August 6, 2014

This interesting article appeared in the NY Times on June 29. It discusses the difficulties parents (and teachers and students) are having adapting to the new way of thinking required for Common Core math. To read the article at the NY Times website, CLICK HERE. If your child is going to be learning Common Core math and ELA this year, be sure to check out all the lessons and practice we have for both at www.TestingMom.com.

Math Under Common Core Has Even Parents Stumbling
By MOTOKO RICH JUNE 29, 2014

GREENWELL SPRINGS, La. — Rebekah and Kevin Nelams moved to their modest brick home in this suburb of Baton Rouge seven years ago because it has one of the top-performing public school districts in the state. But starting this fall, Ms. Nelams plans to home-school the couple’s four elementary-age children. 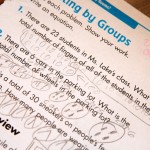 The main reason: the methods that are being used for teaching math under the Common Core, a set of academic standards adopted by more than 40 states.

Ms. Nelams said she did not recognize the approaches her children, ages 7 to 10, were being asked to use on math work sheets. They were frustrated by the pictures, dots and sheer number of steps needed to solve some problems. Her husband, who is a pipe designer for petroleum products at an engineering firm, once had to watch a YouTube video before he could help their fifth-grade son with his division homework.

“They say this is rigorous because it teaches them higher thinking,” Ms. Nelams said. “But it just looks tedious.”

Chrispin Alcindor at P.S. 397 in Brooklyn. Once a model student, he is near the bottom of his class under new standards.Common Core, in 9-Year-Old EyesJUNE 14, 2014
Across the country, parents who once conceded that their homework expertise petered out by high school trigonometry are now feeling helpless when confronted with first-grade work sheets. Stoked by viral postings online that ridicule math homework in which students are asked to critique a phantom child’s thinking or engage in numerous steps, along with mockery from comedians including Louis C. K. and Stephen Colbert, these parents are adding to an increasingly fierce political debate about whether the Common Core is another way in which Washington is taking over people’s lives.

In Louisiana, the dispute intensified this month when Gov. Bobby Jindal said he wanted to withdraw the state from the Common Core, although others questioned his authority to do so. Already, the legislatures in Indiana, Oklahoma and South Carolina have repealed the Common Core standards, and for many candidates running for political office, their views on the standards have become crucial election issues.

The new instructional approach in math seeks to help children understand and use it as a problem-solving tool instead of teaching them merely to repeat formulas over and over. They are also being asked to apply concepts to real-life situations and explain their reasoning.

This is partly because employers are increasingly asking for workers who can think critically and partly because traditional ways of teaching math have yielded lackluster results. In global tests, American students lag behind children in several Asian countries and some European nations, and the proportion of students achieving advanced levels is low. Common Core slims down curriculums so that students can spend more time grasping specific mathematical concepts.

“I taught math very much like the Common Core for many years,” said Linda M. Gojak, the former president of the National Council of Teachers of Math. “When parents would question it, my response was ‘Just hang in there with me,’ and at the end of the year they would come and say this was the best year their kids had in math.”

But for parents, the transition has been hard. Moreover, textbooks and other materials have not yet caught up with the new standards, and educators unaccustomed to learning or teaching more conceptually are sometimes getting tongue-tied when explaining new methodologies.

“It is incredibly easy for these new instructional approaches to look good on paper or to work well in pilot classrooms in the hands of highly skilled experts,” said Frederick M. Hess, the director of education policy studies for the American Enterprise Institute, “and then to turn into mushy, lazy confusing goop as it spreads out to classrooms and textbooks.”

Tensions over the Common Core have been heightened because the standards are tied to new standardized tests being introduced in many states. Teachers are fretting that their performance ratings will increasingly depend on how their students perform on these tests.

While several states have postponed the consequences of test results on teacher evaluations, many educators feel the pressure.

“Imagine, if you will, if the state government came down to Detroit and said in six weeks you have to be 100 percent metric,” said Jonathan Marceau, a fourth-grade teacher in Shelby Township, Mich., a northern suburb of Detroit, who is worried that some algebraic and geometric concepts are now being introduced too early for children to absorb.

“Detroit says, ‘Great, we can do that, but we have to retool, retrain and make sure people have gone through the growth curve on this thing, and it will probably take more than six weeks,’ ” he said. “The government says, ‘Tough, we’re not going to give you any manual or tools for this transition, but if anybody makes a car with a defect, they are going to get fired.’ ”

Some educators said that with the Common Core’s focus on questioning lines of reasoning and explaining answers, the new methods were particularly challenging for students with learning disabilities, or those who struggle orally or with writing.

“To make a student feel like they’re not good at math because they can’t explain something that to them seems incredibly obvious clearly isn’t good for the student,” said W. Stephen Wilson, a math professor at Johns Hopkins University.

Some parents of children who have typically excelled at math find the curriculum laboriously slow.

In Slidell, an affluent suburb of New Orleans, Jane Stenstrom is concerned that her daughter, who was assigned to a class for gifted students as a third grader last year, did not progress quickly enough. “For the advanced classes, it’s restricting them from being able to move forward,” Ms. Stenstrom said one recent afternoon.

Her daughter, Anna Grace, 9, said she grew frustrated “having to draw all those little tiny dots.”

“Sometimes I had to draw 42 or 32 little dots, sometimes more,” she said, adding that being asked to provide multiple solutions to a problem could be confusing. “I wanted to know which way was right and which way was wrong.”

Math experts say learning different approaches helps students develop problem-solving skills beyond math. Employers “want a generation of people who can think and reason and can construct an argument,” said Steven Leinwand, a researcher for the American Institutes of Research.

“This is a shift for an entire society,” he said. “No one should be under any illusion that it’s going to take just a year or two to rethink the way that we teach mathematics, because it is really challenging.” The State Education Department has said it will not use scores from Common Core tests in teacher evaluations for the next two years.

Laci Maniscalco, a third-grade teacher in Lafayette, La., who said that sometimes her students cried during the past year when working on problems under the new curriculum, said she had seen genuine progress in their understanding — and in her own, as well.

“I have told my students countless times that I wish I had been taught the way you are having the opportunity to learn,” she said.

Correction: July 1, 2014
An article on Monday about the struggle to teach math under the Common Core academic standards referred incorrectly to Linda M. Gojak’s association with the National Council of Teachers of Math. She is a former president, not the organization’s current one.

View Practice Questions For The…